Why is my boiler leaking water after a service? 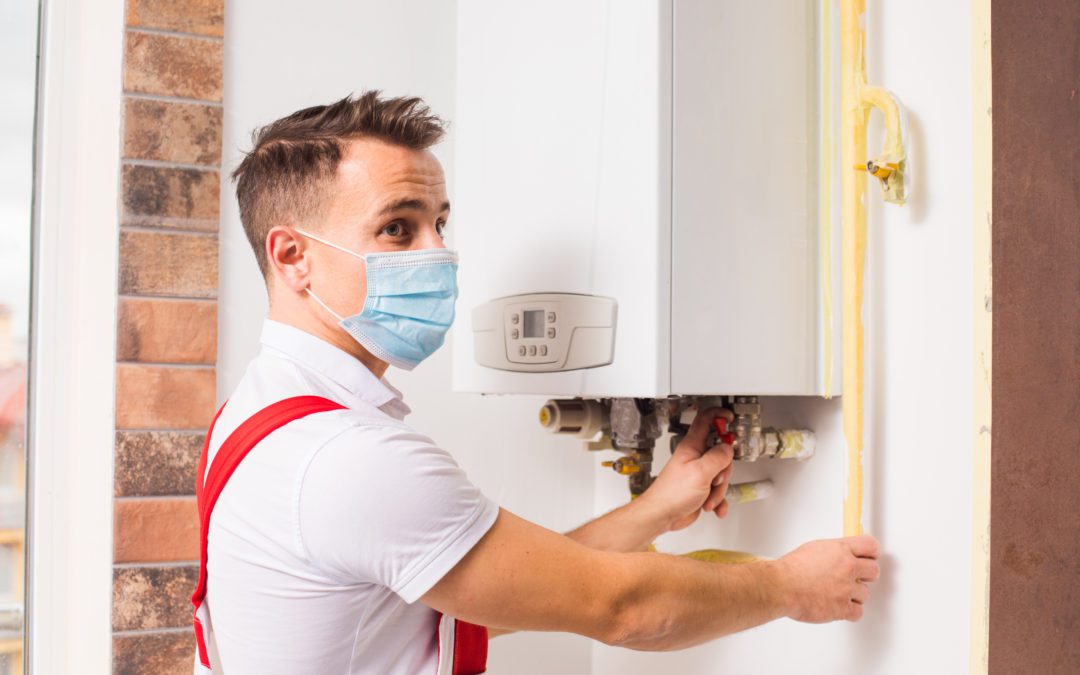 Boiler services exist to minimise the problems that can occur through regular use.

Sometimes, the service itself may cause a small problem, one that can either be easily fixed with a revisit or that might expose a bigger, hidden fault.

Let’s take a look at why you might find your boiler leaking after a service.

Why is my boiler leaking water after a service?

The good news is that there isn’t necessarily anything broken. It may simply be the case that your engineer replaced a part in a way that doesn’t quite seal, or that broke during the act of being taken out and put back in.

This could be a joint in the pipes or a seal. A faulty installation might be the original cause for this, making it hard for the engineer to replace a part in the same spot once it’s been taken out. It’s important to understand a simple mistake should be a straightforward fix, and a quick call to the engineer to explain will likely have them returning to rectify any mistake made quickly.

Is a leaking boiler serious?

It depends on the nature of the leak, but most leaks caused after a boiler service will be minor. A bucket or something similar to catch the water until an engineer can come and help may be all you need.

If the pressure in your boiler is dropping as a result of the leak, it would be best not to keep topping up the system and to make do until you can have the problem fixed. Topping up your system means putting extra pressure back into a circuit that you know has a weakness and this could worsen the leak.

Can I use my boiler if it’s leaking?

It’s best not to use your boiler if a leak presents itself. Turn off your central heating and don’t use any fixtures that draw hot water, such as a mains shower, until a remedy has been found.

If you’re able to identify your isolation valve, you may find that stopping the water feed to the boiler helps the leak in the meantime while preserving the cold water feed to the rest of the house. However, if you have doubts about how to go about this, it may be best to leave everything alone until help arrives.

Grab a bucket and some towels and catch the water as best you can in the meantime.

Can a leaking boiler explode?

If the leak is being caused by an excess of pressure in your system, then this is a possible risk. The pressure gauge on your boiler will indicate if this is the case. The average ideal pressure is between 1 and 2 bar on the gauge – anything more with hot water escaping the system may explain why your boiler is leaking after a service.

If your boiler is leaking after a service, or even if it’s just started leaking out of the blue, call Bumblebee’s expert team to get it fixed. We’ll send somebody out to help and give you advice to manage the problem in the meantime.

Bumblebee Plumbing & Heating (FRN 751901) is authorised and regulated by the Financial Conduct Authority. Bumblebee Plumbing and heating acts as a credit broker and not a lender and do not receive a fee for the introduction.

The business always endeavours to provide the best service. However, on rare occasions there may be times where a customer may not be completely satisfied.

To ensure the business can put things right for you, as soon as possible after the completion of the works, please inspect the work to ensure everything has been carried out based on the contract terms and to the high standards the business aims to achieve.

Please contact the business straight away with any concerns either by phone, email or write to us. If writing, get proof of posting.

On receipt of your complaint the business aims to respond within 5 days.

The business will arrange a convenient date to come and view and/or remedy the situation within 28 days.

In the unlikely event the business is unable to resolve your complaint having exhausted the business complaints procedure, it may be necessary to use another complaint service. Where the business cannot resolve the complaint to your satisfaction and/or agree to the final resolution requests confirmed to us; and both parties agree a ‘deadlock’ has been reached, you can then escalate your complaint.

Bumblebee Plumbing and Heating, Company number 09799981, registered in England and Wales. Registered office address 29 Bransdale Close, Great Sankey, Warrington, WA5 3FW
We use cookies on our website to give you the most relevant experience by remembering your preferences and repeat visits. By clicking “Accept All”, you consent to the use of ALL the cookies. However, you may visit "Cookie Settings" to provide a controlled consent.
Cookie SettingsAccept All
Manage consent

This website uses cookies to improve your experience while you navigate through the website. Out of these, the cookies that are categorized as necessary are stored on your browser as they are essential for the working of basic functionalities of the website. We also use third-party cookies that help us analyze and understand how you use this website. These cookies will be stored in your browser only with your consent. You also have the option to opt-out of these cookies. But opting out of some of these cookies may affect your browsing experience.
Necessary Always Enabled
Necessary cookies are absolutely essential for the website to function properly. These cookies ensure basic functionalities and security features of the website, anonymously.
Functional
Functional cookies help to perform certain functionalities like sharing the content of the website on social media platforms, collect feedbacks, and other third-party features.
Performance
Performance cookies are used to understand and analyze the key performance indexes of the website which helps in delivering a better user experience for the visitors.
Analytics
Analytical cookies are used to understand how visitors interact with the website. These cookies help provide information on metrics the number of visitors, bounce rate, traffic source, etc.
Advertisement
Advertisement cookies are used to provide visitors with relevant ads and marketing campaigns. These cookies track visitors across websites and collect information to provide customized ads.
Others
Other uncategorized cookies are those that are being analyzed and have not been classified into a category as yet.
SAVE & ACCEPT